On the morning of October 31st, 2021, a miracle occurred and I have photographs to prove it.

I was at Our Lady of Guadalupe Catholic Church in Queen Creek, Arizona. I had just gone to mass with my children. After mass, my children and I were walking around the church property. My six year old daughter stopped in front of a statue of Mary and Jesus, did a cute pose, and said, “Hey Dad, can you take a picture of me?”

I said sure and got out my dumbphone. (By the way, maybe the most miraculous thing about this story is that I still use a dumbphone. LOL.)

I took one, and only one, picture of her. After I took the picture, I didn’t even look at it closely. At the time, I probably thought it would be one of those low-quality pictures no one really ever looks at and I delete eventually. My attitude is that my wife takes a billion pictures of our kids so I don’t need to bother myself with taking pictures of them. Plus, my dumbphone doesn’t have a very good camera anyway, and I’m not much of a photographer. But, mostly to humor my kid, I snapped a quick photo.

Here’s the picture of my daughter and the statue: 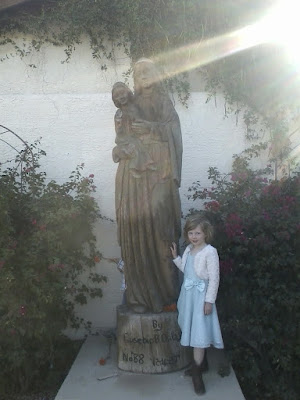 Next, my four year old son stood in front of the statue and said, “Can you take a picture of me too?” So I said OK and took one, and only one, photo of him.

Here’s the picture of my son and the statue: 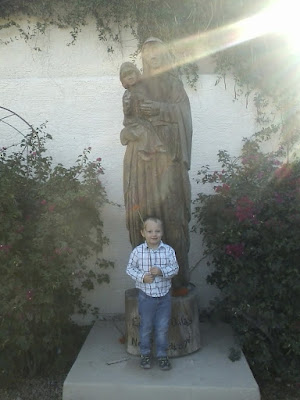 I put the phone back in my pocket and went about the rest of my day.

Some time went by. I don’t know if it was a week or a month or what, but, a while later, I was at work, and I was a little bored. I was doing a task that allowed me to look at my phone while I was still working. (Probably. I can't remember. It's possible that I was slacking off.) I casually scrolled through my old photos, possibly thinking about deleting some of them to clear up storage space. I saw the picture of my daughter you see posted above and looked at it for a second. That’s when I noticed something incredible.

That ray of light. It’s rare for a ray of light to show up in a photograph like that. And what did the ray of light land on? Right on the face of Mary! I was astounded.

I looked at the next picture in my phone, which was the picture of my son standing in front of the statue of Mary and Jesus. I was shocked by what I saw: a ray of light shining right on the face of the Child Jesus! “What are the chances?” I thought.

And so now I direct that question to you, the reader. What are the chances that those rays of light would shine perfectly on the faces of Mary and Jesus? One in a billion?

Folks, this was a miracle. When you look at those pictures, you are looking at a miracle.

Skeptics reading this may say that it was merely a coincidence. And strictly speaking, yes, it is within the realm of possibility that neither I nor my children were guided by any supernatural forces when I took those pictures. Or maybe some people may think that I took a million pictures in an attempt to get those rays of light to appear that way. Maybe some people may think that I digitally altered the pictures, or that I’m somehow making all of this up. Well, look, all I can do is give you my testimony of what happened, post the pictures and let you look at them for yourself. And if some detective wants to examine my phone, I’d be glad to turn it over for inspection.

What does this miracle mean? That’s tough to answer precisely. I’d like to say that it means the Catholic Church is the one true religion and that everybody in the world should be Catholic. But maybe that’s going too far. But I do think I can safely say that this miracle means, at least, that my newfound Catholicism is good. I do think I can safely say that the miracle caught on photograph means that God is pleased that I am leading my family into the Catholic Church.

It might be relevant to note that this miracle did occur a little more than six months after my baptism at the 2021 Easter Vigil, so it was a time in which I was still very new to the Catholic faith. Maybe the miracle was a way of God reassuring me that I was going down the right path. (If you'd like to read more about my conversion, click here.)

I’ve said a lot of things to God, and of course I can’t remember everything I’ve said to Him in prayer over the course of my life, but I don’t think I’ve asked for a sign. Maybe I have. Ha! I probably have. This is a complicated area. It is appropriate to ask God for blessings and miracles, and it’s even appropriate to seek for scientific evidence that supports theological claims. That’s what "The Miracle Hunter" Michael O'Neill does. However, much to the frustration of skeptics, it’s not appropriate to ask for absolute proof of things from God. See Matthew chapter 12, verse 39.

The point is, I didn’t ask God to put those rays of light in those photographs, I was just going about my duty as a Christian by attending mass with my children. But I am so thankful that God sent that sign to me. From now on, if I’m ever doubting the teachings of the Roman Catholic Church, or my decision to convert, I can look back at these photographs, and remind myself that God is real and that he is actively involved in my life, and that I ought to worship Him.

What do you think? Do these photographs show a miracle?

misterfake371
I grew up in the LDS Church in the USA. I went on a mission, got married in the temple, and had two kids. Then I lost my testimony. It's a long crazy story, but I currently hold a temple recommend and a calling. I go to church every Sunday, and most of the time I enjoy it. I pay tithing, I home teach, and I sing the hymns. I have faith in Jesus Christ. I plan on staying LDS for the rest of my life. Because of the sensitive nature of this blog and for other personal reasons, I wish to remain anonymous. I started this blog to help others who have come across troubling information about the Church. I also write this blog to help the Church, an organization I hold dear.